Pretoria (South Africa) 14 August 2019 (SPS)- The National Education, Health and Allied Workers’ Union (Nehawu) organized a demonstration in front of the Moroccan Embassy in Pretoria on Wednesday to demand the decolonization of Western Sahara and the expulsion of the Moroccan regime of occupation from the African Union.

Members of the union gathered dress in their Trade Union’s T-Shirts chanting slogans against the Moroccan colonization of Western Sahara and lifting placards with slogans such as “Remove Morocco from the African Union”, “Forwards with independence of Western Sahara”, “Decolonize Western Sahara”, “Boycott trade with Morocco”, “Free political prisoners” And a number of other slogans.

The demonstration is part of the union’s “Solidarity Program”, as part of an international campaign to defend the right of the Sahrawi people to self-determination.

The demonstrators voiced their opposition to the systematic plunder of Saharawi natural resources, calling on Morocco to end its illegal occupation of Western Sahara.

The union also reiterated its condemnation of continuing human rights violations by Morocco, including violence by Moroccan security forces against Sahrawis, who were celebrating the victory of the Algerian national football team at the African Cup of Nations last July 19th. 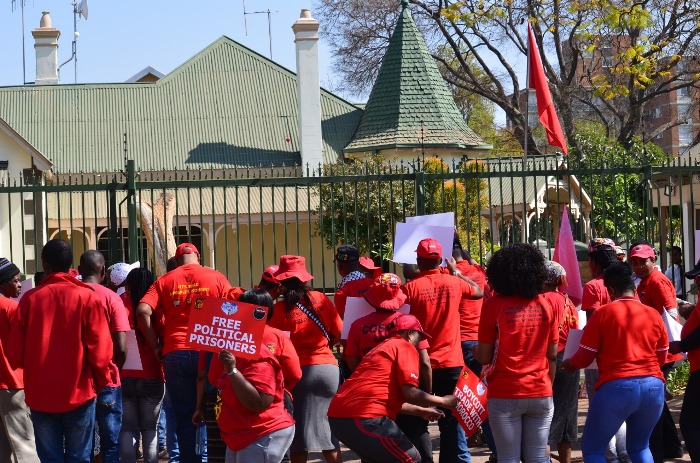 Economy Hana Saada - February 28, 2020
0
A new gas compression and reinjection station, with a production capacity of 24 million m3 per day has been inaugurated in Hassi Massaoud...

News Hana Saada - February 28, 2020
0
MEDINA (Saudi Arabia) - The President of the Republic, Abdelmadjid Tebboune, wrapped up his state visit to the Kingdom of Saudi Arabia on Thursday...

News Hana Saada - February 28, 2020
0
ALGIERS- Algeria has not recorded any other coronavirus cases (Covid-19), apart from that contracted by the Italian national, said Thursday the Health Ministry’s manager...

Sport Hana Saada - February 28, 2020
0
Algeria underlined its position as the powerhouse of African boxing as it qualified seven boxers for the Olympic Games on Wednesday at the Olympic...

Economy Hana Saada - February 28, 2020
0
Prime Minister Abdelaziz Djerad referred to the introduction of the national strategy for a smooth energy transition aimed at developing and raising the production...